Our market season has ended, but you can find most of your favorite farmers and food producers at the Wintertime Market indoors at the Hope Artiste Village, 1005 Main St, Pawtucket:

And of course, LeFavorite Bakery is open year round at their shop in the Governor Francis Shopping Center, 951 Namquid Dr, Warwick, RI 02888.

Voting for the village scarecrow contest has been
extended until tomorrow November 4.  The scarecrow made by the Edgewood
Garden Club at the market is on the pole at Broad St and Rhodes Place.

UPDATE: The winner will be announced at Cork & Brew, 2200 Broad Street in the Village on Friday, November 4, 2016. Stop by between 5-7PM for a FREE Autumn beer and wine tasting event where we will announce the winner.

And don’t forget to vote in that other election on Tuesday!

On Saturday, there will be a tour of Edgewood homes that have installed
solar panels.  Meet at 48 Bartlett Ave, Cranston at 2 PM.

See you at a market somewhere. 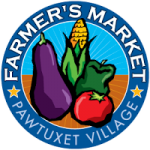